My Coffee Can Radar Implementation 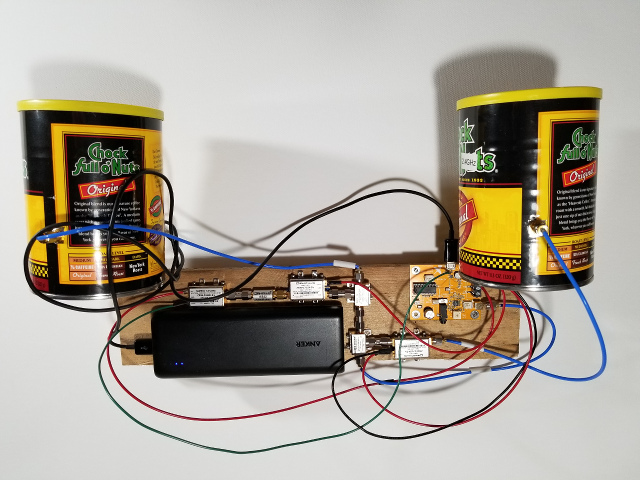 The primary difference between my implementation and the original published by MIT is that the breadboard has been replaced with a custom PCB, and the AA batteries have been replaced by a USB power brick. There are no changes to the RF component chain of minicircuits blocks.

My antennas were made from 'Chock Full O' Nuts' coffee since this was the only metal can coffee that I could find at my local grocery store a few years ago. The piece of wood used for mounting the whole thing together came from a recycled pallet, and the power brick is held on by a piece of double-sided tape.

The following design files should be all that is needed to build the PCB I made for this project yourself. The source files are in Altium Designer and are not publicly available.

One of the major reasons I set out on making this project is that the cost of doing it yourself is still drastically lower than the cost of buying a demonstration kit. Looking through Dr. Gregory Charvat's YouTube playlist for coffee can radar you will find a pair of commercial alternatives including Pasternack's kit ( $2500.77 ) and Quonset's kit ( $899.99 ). I figured the cost of building the DIY version has got to save at least a few hundred dollars from these alternatives. The table below shows the major prices I paid for components over the last two years. Since these costs were incurred over a large period, they may not accurately represent current market prices.

This table excludes some minor costs such as the antenna feed wire in the cantennas, the USB power cable, the wood screws, and the 3.5mm audio cable. It also overestimates the cost per unit because the DirtyPCBs order came with 12 PCBs and the Digi-key order was enough components to build 4 parts (excluding the antennas because SMA jacks are expensive). The most naive approximation that assumes all extra parts are just waste puts the total cost at $640.75 - a nice 40% cheaper than the Quonset kit.

Note: The XR2206 is available from Jameco electronics (purveyor of obsolete parts), but I found it cheaper to buy function generator kits from China that utilized the parts. 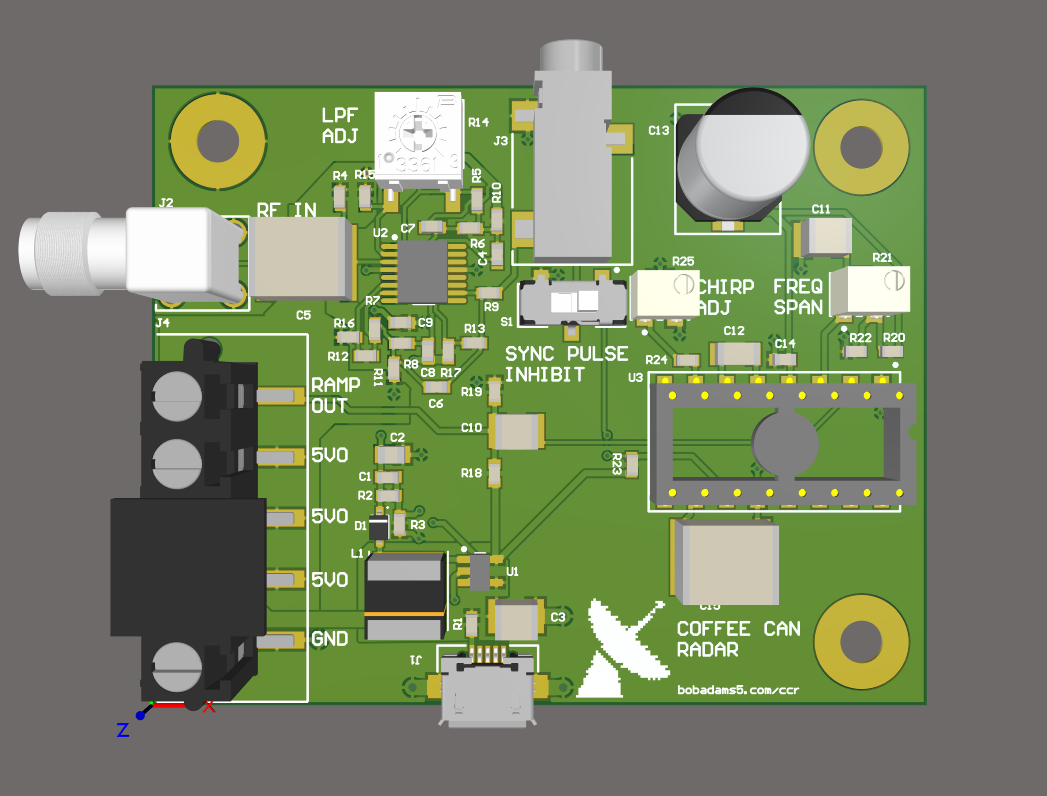 The PCB replaces the original op-amp with one that has an active part status. The wiring to the RF components is made easier by the use of a screw terminal connector with silkscreen labels. All through-hole components have been replaced with surface mount components except for the XR2206 which is placed into a SMD socket. The only functional circuit change is the addition of a boost converter (Microchip MIC2251) that boosts the USB +5V into +12V needed for the op-amp and XR2206 circuits.

If I make another iteration of this project there are a few things that I would like to iterate on. My highest priority would be to integrate custom designed RF circuits into the signal processing PCB to remove the need for mini-circuits components. On this project, minicircuits ended up being more than 50% of the cost of implementation. If this cost can be reduced, radar projects would be drastically more accessible to the electronics hobbyist community. The second highest priority would be to replace the XR2206 with an op-amp circuit.

Other smaller priority updates would be: